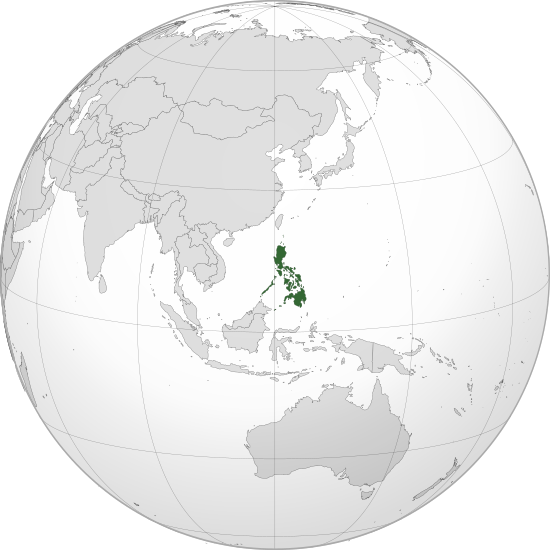 The Philippines (/ˈfɪlᵻpiːnz/ (About this sound listen); Filipino: Pilipinas [ˌpɪlɪˈpinɐs] or Filipinas [ˌfɪlɪˈpinɐs]), officially the Republic of the Philippines (Filipino: Republika ng Pilipinas), is a sovereign island country in Southeast Asia situated in the western Pacific Ocean. It consists of about 7,641 islands[17] that are categorized broadly under three main geographical divisions from north to south: Luzon, Visayas, and Mindanao. The capital city of the Philippines is Manila and the most populous city is Quezon City, both part of Metro Manila.[18] Bounded by the South China Sea on the west, the Philippine Sea on the east and the Celebes Sea on the southwest, the Philippines shares maritime borders with Taiwan to the north, Vietnam to the west, Palau to the east and Malaysia and Indonesia to the south.
https://en.wikipedia.org/wiki/Philippines
Top
Post Reply
1 post • Page 1 of 1